As some readers of this page might have experienced, I just recently happened to mostly be into netlabel music, for a bunch of different reasons, including the inability of most of nowadays “music marketing” structures to really come up with interesting new acts and styles – which, then again, is not all too surprising in a musical world in which even “alternative”, “post rock” or “indie” mostly seem just genre descriptions rather than outlines or definitions of something new, interesting, inspired.

But that’s another story. Quite a couple of years ago, there seems to have been a dominance of netlabels being into all sorts of mininal techno, IDM and this kind of stuff, but these days, this part of the musical world has considerably grown in any possible way, so at the moment, no matter which kind of music you are into, finding good and inspired artists on the ‘net should be an easy task. And there always are new things to be found. One of the strongest netlabels I stumbled across during the last months definitely is Sinewave, a “[…]post-rock / shoegaze / experimental net label headed in the depths of São Paulo, Brazil[…]”. Given this description, one could be vaguely sure what kind of music to expect, and yet, there are some major surprises to be found in the Sinewave label back catalogue. Like Uppsala Solemne, in example, a twopiece from somewhere across South America (various sites state them to be from either Porto Alegre, Brazil, or Buenos Aires, Argentina).

Same as peculiar / original as their band name actually is their music. Sinewave does label their doings to be “experimental ambient” music, and in some ways, this ain’t all too wrong. Yet, it is completely different to what most “ambient” acts are up to do these days: Though there are some electronic aspects to be heard in the music, Uppsala Solemne mostly lives off using instruments like pianos, acoustic guitars, violins, all along with voice samples and occassional vocals, and, this way, manage to create an atmosphere that lives somewhere in between (dark) ambient, neoclassical styles, maybe even neofolk in some moments. This is quiet music. And it is music of utter intensity. The band seems to have a vision which reflects throughout songwriting, arrangements, effects and artwork altogether, which is noteworthy to say the very least. 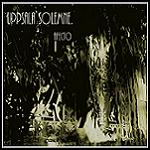 This is not noisy or harsh or even partly to qualify as “electronic” or “rock”, be it “post” or “not”. And it is thoroughly original in the way it is done. And – it just works out, maybe for reasons which are rather subjective in the way one perceives music. No matter how, it is a pretty good idea to check out their two releases “Afecto” and “A Fúria do Vento” and get lost in the music, and be it just for a few moments: Maybe the only thing really worth complaining about the two of these releases is that they come to an end way too quickly. If the music doesn’t work for you, maybe you won’t really care, but if it does, you might end up indeed hoping to listen to more of that inspired, interesting band project sooner or later. I surely do.